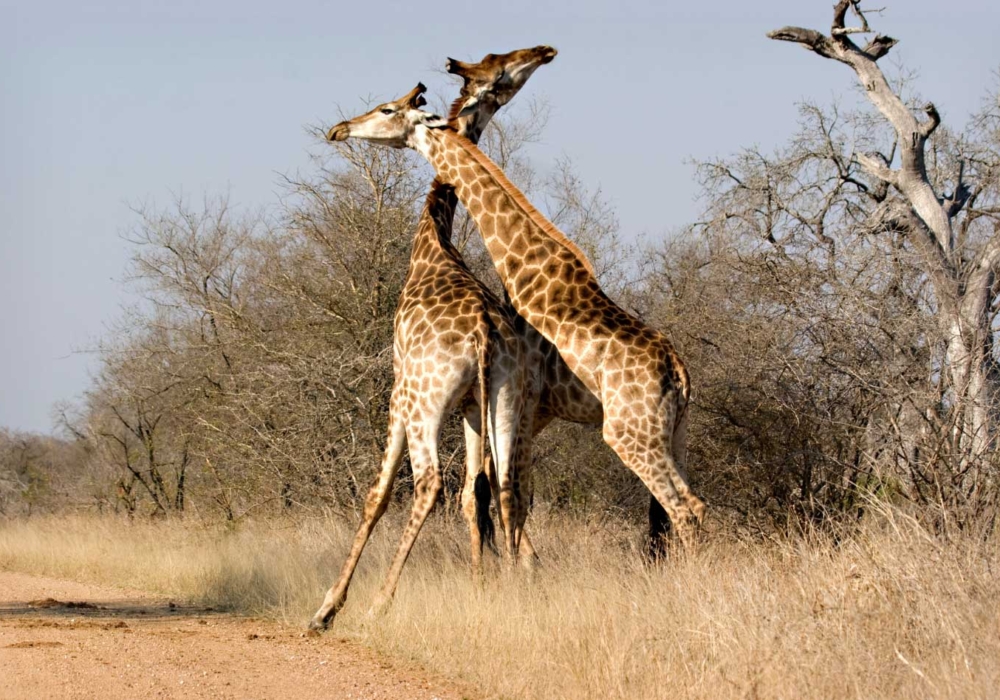 What better month to answer the question, “Are giraffes gay?” than Pride month.

There has been debate about gay or homosexual behavior among animals, other than humans, for years. Yet the topic remains taboo in some scientific circles. So, coupled with my 23 years of observation in the field in Africa and that I identify as an L within the LGBTQ community, I’ll share what I have learned about supposed gay giraffes.

Giraffes form loosely associated herds. Males and females do not pair up, they procreate only.  “Procreating” takes about as long as it takes for you to read the word” BAM”! And from there they hang out, eat, and journey around the bush. While hanging out and eating, males gather in relatively spaced out distances from one another, keeping an eye out for danger. Females hang out with other females and young. Often one female takes the duty of managing the crèche (nursery) of young giraffes.  Albeit there’s a general air of indifference among giraffes.

What’s So Gay About Giraffes Then?

Many images have circulated of giraffes “necking” which leads to the assumption that giraffes are gay. But honestly, if you were to watch what they are really doing, giraffe necking is equivalent to two giraffes fighting with their heads and long necks. One might see it as cuddling or gay foreplay, but it’s really just “boys being boys”.

A form of fitness training, males jostle for dominance which is akin to teenage wrestling. They back their rear ends up until they touch hip-to-hip, swing their heads out far from the other giraffe, and then swing back toward their “pal” with a “thwap!” to the neck with their two boney horns. Sometimes a more practiced giraffe will avoid the headlock movement just in time.

Can you imagine being hit by a 200-pound baseball bat? Doesn’t sound fun to me either. But for giraffes, it’s what they do. And, in the end, they walk away buddies for life. It’s a weird way to bond but that’s what they do!

Do Giraffes of the Same Gender Have Sex?

Well technically no, but there are signs that two males may make attempts to have sex. At times, male giraffes have been observed having, what looks like, sexual intercourse, courtship, and partnership. The best, and only, explanation for this behavior is that either dominance is on display or bonding.

While giraffes are loosely associated, they are also remotely dependent upon each other for safety and companionship. Despite the aloofness they are a herd species after all.

Whether or not giraffes are indeed gay may be debated for centuries. Either way, giraffes make the perfect gay icon for many reasons:

As the LGBTQ owner of Wild Rainbow African Safaris (WRAS), I never intended to create a “gay” logo when our team chose two giraffes to represent the WRAS brand. When we decided to rebrand, we did a broad survey among all previous guests, safari influencers, and fellow safari guides and asked the following question: “What animal do most guests find the most beautiful, surprising or unexpected?”

A whopping 80% of respondents said “Giraffe.” Many guests come to Africa eager to see their favorite animals: elephants, rhinos, honey badgers, etc. Yet, upon seeing the giraffe for the first time, with its grace of movement and enormity, and then learning about its evolutionary adaptations, guests end up falling in love with this graceful and unique animal.

We simply wanted a logo that would be inspiring and an animal that we knew people loved. But we’re filled with pride that we chose the perfect mascot for an LGBTQ-owned safari company!